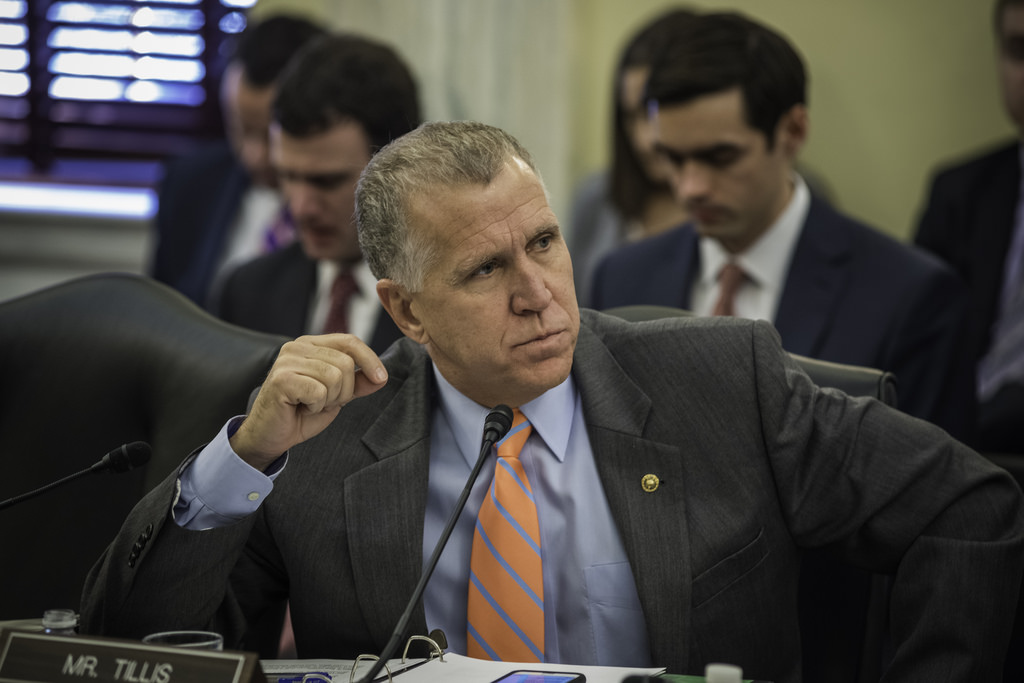 This coming Saturday Senator Tom Tillis will be honored at the Charles Taylor Holiday Dinner at the Crown Plaza Resort in Asheville.

Some of us here in Asheville question whether at this time Senator Tillis deserves to be so honored.  In the last month there have been three major reports, one from the United Nations Intergovernmental Panel on Climate Change, and two from the US Government itself, predicting that unless immediate large-scale actions are taken to reduce greenhouse gas emissions (GHG’s), the earth may very likely experience runaway, civilization-destroying climate change. Those who were paying attention this fall did not even need these reports to conclude that catastrophic climate change is already upon us in the form of Hurricanes (Florence and Michael in the Southeast) and drought and wildfires in California. These extreme weather events have resulted in scores of deaths, thousands of uprooted lives and businesses, and tens of billions of dollars in property damage. While Senator Tillis bears only  a little responsibility for these disasters, or for the climate change that has occurred to date, he must be faulted for not taking actions to reduce the likelihood of future, even worse events.

While he was Speaker of the House  in the NC General Assembly, Senator Tillis ushered in the fracking industry, advocated the denial of climate change in legislature, prohibited state agencies from projecting sea level rise when evaluating property values, and helped to gut the NC Department of Environmental Quality. Worse still,  as late as 2015, as a US Senator he voted to endorse the view  human activity does not contribute to changing global temperatures. And then later he supported President Trump’s decision to withdraw from the 2015 Paris Climate Accords, an international agreement among 197 nations which, when signed, committed the US and everyone else to specific GHG reducing goals. Because of President Trump’s actions, nad the suppor the President gets from leaders like Senator Tillis. the US is becoming an outlier and a huge obstacle in humanity’s efforts to avoid climate induced catastrophe.

Now fortunately, this is not the end of the story. In the last few months, Senator Tillis has begun to wake up and to admit that climate change is real.  Two weeks ago he was quoted as saying: “The 4th National Climate Assessment report serves as a glaring reminder of the long-term risks of climate change. Both parties need to work together to deploy an innovative, market-driven strategy to combat the impacts of climate change.”

We heartily applaud Senator Tillis for this change in his thinking. It is a huge step forward.

But  as a US Senator he can do much more than change his mind or make green-washing speeches. If he truly believes in the risks of climate change, he must also act immediately to eliminate those risks.

He could of course, start by urging Donald Trump to remain in the Paris Climate agreement. He has not done so. His opposition to this important agreement still stands.

This last week he also sat on the sidelines of a crucial vote in the US Senate. The full Senate voted to confirm  Trump’s fossil fuel extremist nominee, Bernard McNamee, to the Federal Energy Regulatory Commission (FERC) . FERC  is the one of the most powerful and important energy regulatory agencies in the world, and the Senate had an opportunity with this vote to  set the country’s energy policy in a direction of limiting greenhouse gas emissions.  Instead, all 50 Republicans present voted for Bernard McNamee, who has argued publicly that renewable energy “screws up” the grid, and describes the fight of the fossil fuel industry with environmentalists as a struggle between democracy and terrorism.

Interestingly our Senator Tillis did not even show up for the vote. He was the only Senator not present. Perhaps this was unavoidable. But he also had an opportunity to publicly urge his Republican colleagues to join all 49 of the Senate Democrats to vote against McNamee. He apparently took the coward’s way out, and kept silent.

I had a meeting a couple of days ago with a class of high school students in Asheville. I asked them how many of them feel hopeless  in the face of climate change, and powerless to do anything bout it. All the students and their two teachers raised their hands.

Senator Tillis says he has changed his mind about climate change. It is past time for him to prove he means it by taking leadership in the Republican Party. He must work to persuade the President and the Party to take bold action to immediately limit GHG’s and transition to renewable energy,.

The earth can wait no longer. Our children’s fate and future lives are in the balance.