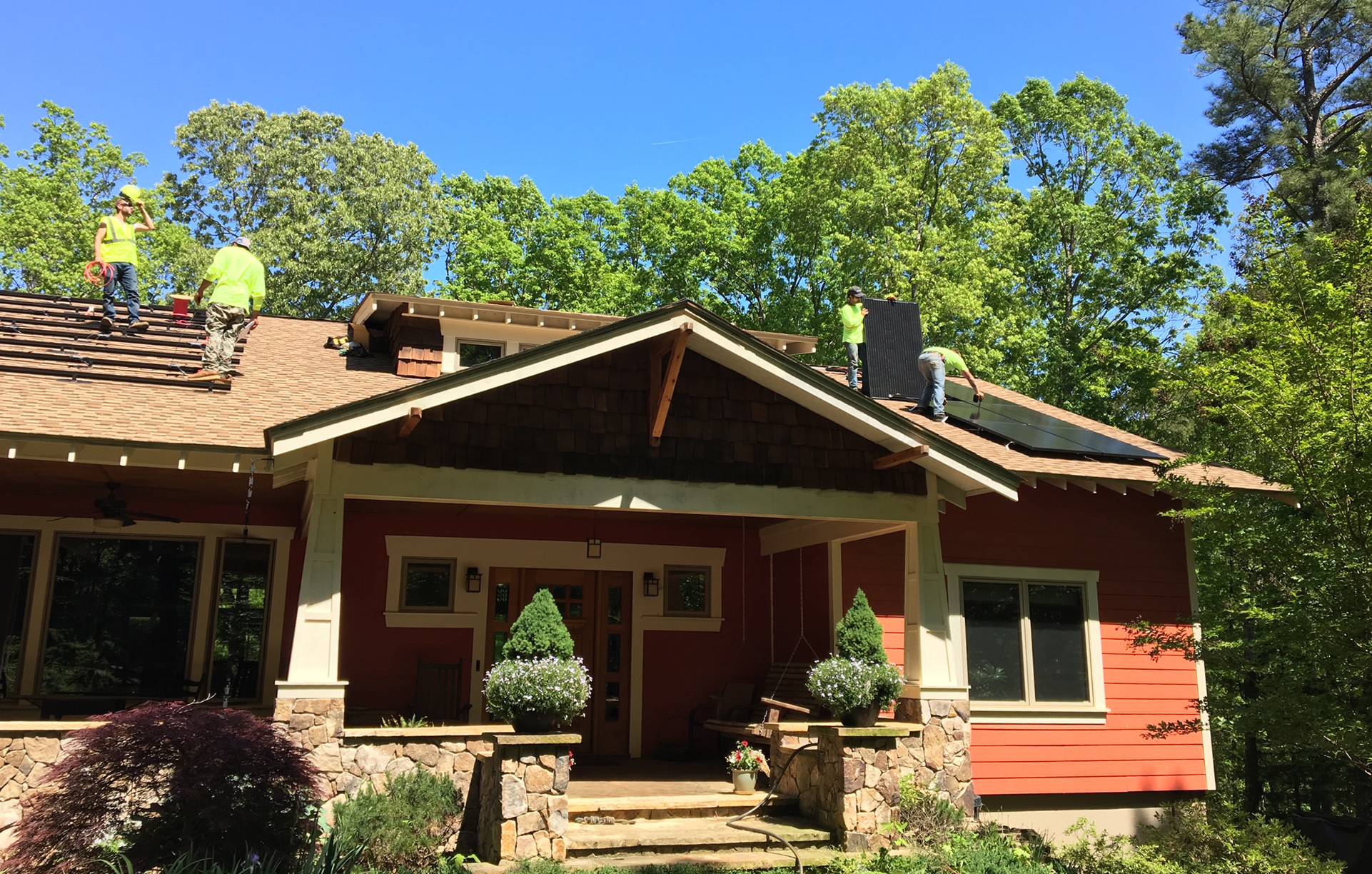 I was recently asked by the CEO of Yes Solar Solutions, Stew Miller, if I would agree to be interviewed with him by our local CBS news affiliate in Raleigh to talk about the Duke Energy Rebate my husband and I received last year. Miller’s firm installed solar on our home last May – for the record, an exceptional company I highly recommend – and we received a rebate late last summer. I of course jumped at the chance to talk about this program.

You see, as someone who works as an activist in the fight for climate justice I have some strong thoughts on the Duke Energy rebate. Likely the title of this article was your first hint on which direction these thoughts might lie. And I was very clear about them on camera during the interview by Robert Richardson, the reporter who came to my house. Of course, these comments didn’t make it into the final article Richardson published to their website or the one that was aired on the news last week.

Don’t get me wrong; we appreciated receiving a check for $6,000. Who wouldn’t? But the truth is, the funds that Duke Energy set aside for their Solar Rebate Program to support residential solar ran out within the first two weeks last year. And this year, 2019, it ran out within the first two days! It’s already gone! As is the money for business rebates. So why, when there is clearly so much public interest, do I call their program a “disincentive” you may wonder? According to Stew Miller, they have indeed been flooded by people interested in putting solar on their homes and businesses and in taking advantage of the Duke Energy Solar Rebate program. But as Miller explained it to Richardson last week, his firm has been waiting to see who would be eligible for a rebate this year. He had many customers lined up, waiting to find out. And when they learned who would receive rebates and who would not, well, most of the customers who would not receive one opted to instead hold off until next year; thus the disincentive of Duke Energy’s rebate program.

I would wager this has been Duke Energy’s plan all along. They are obligated to distribute about $10 million for the program this year. That may seem like a lot, but we’re talking about a multi-billion dollar company that pays their CEO Lynn Good over $21 million a year. They have a lot more money they could invest in this program if they truly wanted our state to move to a clean energy future. So why wouldn’t they?

And what makes me think
they don’t want a clean energy future?

Well, first off, they have already released their energy plans through 2033 and therein identify that by 2033 only 8% of their energy will come from clean, renewable energy sources, such as solar and wind. That’s it. Just 8%.

Well, we know that they know what dirty fossil fuels are doing to the planet through global warming. And no doubt CEO Lynn Good has read the most recent IPCC report, which states that we have until 2040 to move 100% of our energy use to clean renewable energy sources AND SIMULTANEOUSLY engage in technologies that will additionally remove significant amounts of C02 from the atmosphere in order to stay under the 1.5°C global warming target. Duke Energy’s rebate program is merely their attempt to whitewash the public into thinking that they support solar energy development in our state. Perhaps you’ve seen their slick TV commercials on how they support solar energy? Local non-profit clean energy advocate, NC WARN, has infuriated Duke Energy when they called them out last year on their misleading practices.

You see, Duke Energy makes lots more money, to the tune of billions of dollars more, on building new natural gas pipelines and natural gas infrastructure, than they do on building solar and wind energy systems. You can learn more about the Duke money story in an article written by regulatory and energy expert, Nancy LaPlaca. She also explains how utilities are deceiving the American public on “natural” gas as a bridge fuel in this article. The truth is, in fact, quite frightening. It is in Duke’s interests, though, and those of their shareholders, that they make the most money possible. And this means NOT pursuing clean, renewable, affordable solar energy. This means marrying all of us to a dirty energy future that will doom us all.

Do I have any good news? Well, yes! So glad you asked! Even without the Duke Energy rebate, it is still almost always more economical to go ahead and get solar installed on your home or business, and it is arguably one of the best investments you could make today. Prices have dropped by about 50% in the past five years, and there is currently a 30% federal renewable energy tax credit (based on the total cost of installation – huge!) through the end of 2019. And the eligible deduction can be carried forward to the succeeding taxable year if you have not paid this amount in federal taxes in 2019. The tax credit amount drops gradually after 2019. Learn more at dsireusa.org

And even better? There are quite a few companies that will finance your solar installation, and your monthly payment will likely be less than your current monthly energy bill to Duke. And you’ll be making your own energy!

Amanda Robertson is co-chair of NC Climate Solutions Coalition and CEO of The Farthest Pixel, an educational media design firm in Pittsboro, NC.